Post recent pic of your Stella (or P-series Vespa, or Bajal)

Scooter and Rally Pictures and Videos

Post recent pic of your Stella (or P-series Vespa, or Bajal)

Inspired by a thread on the former Stellaspeed site, but since I check in here WAY more often, one is needed here.
Simple- post a cool pic of your Stella, or similar design scoot. Heck, cool pic of ones you spot are cool too. and here is an older one for good measure Here's mine on the day I bought it (last Saturday), in front of the dealer w/my old scoot behind it:

vwgrl1999 wrote:Here's mine on the day I bought it (last Saturday), in front of the dealer w/my old scoot behind it:

Great pic, friend. My very first scooter was a creme/red Metro...that I loved...till I test rode a Buddy

"When you're racing, that's when you're really alive. Everything else...everything...just becomes waiting to race." - Steve McQueen
Top

nothing special... but here is a recent trip running errands

vwgrl1999 wrote:Here's mine on the day I bought it (last Saturday), in front of the dealer w/my old scoot behind it:

Great pic, friend. My very first scooter was a creme/red Metro...that I loved...till I test rode a Buddy

I absolutely loved that Metro! I kind of wish I could've kept it, but I really don't have a need for two scooters! haha I put 9100 miles on the Metro in the 4 years that I owned it. It will be missed, but I have wanted a Stella for years and so far I am loving it!
Top

*edit* Took a better shot. Here it is.

Last edited by JohnnyScoots on Tue May 01, 2012 4:20 am, edited 2 times in total.
JohnnyScoots' Blog Connect with Prentice
Top Look out world, Grandma has a brand new scooter.

I left the coke crate on from errands yesterday - this is a huge Italian-esque house a few blocks from my house.

"When you're racing, that's when you're really alive. Everything else...everything...just becomes waiting to race." - Steve McQueen
Top

if you can swing one, it is completely and utterly worth it. The ride home from the dealer on my Stella was almost transcendental. I called a friend when I got home, giggling like a kid with a sugar high from Christmas candy. When he asked me how was the new scooter, all I could say was, 'Man, it felt like I was scooting for the first time.' I like my Blackjack like a schoolboy loves his pie, but the Stella is a whole other thing. The handling, the rattling, the clunk of shifting...everything feels amazing. I feel much more 'connected' or 'in tune' with the mechanisms of the Stella. It's hard to describe without sounding all hippie one universe stardust, but it is how it feels.

And, not to gloat, but the best feeling is to ride both in the same day.

= ultra fun!!!!
"When you're racing, that's when you're really alive. Everything else...everything...just becomes waiting to race." - Steve McQueen
Top

There are some sure nice sweet lookers scooters here in this thread..
I hope mine fits in..

Here is a pic with my new SX roll bag

By the way... I am selling my SHAD 29 top case if anyone is interested
topic22091.html
Top

ScootLemont wrote:Here is a pic with my new SX roll bag

Where did you get the roll bag? I like it and it sounds like better quality than the Prima bags.

ScootLemont wrote:Here is a pic with my new SX roll bag

Where did you get the roll bag? I like it and it sounds like better quality than the Prima bags.

I never owned a Prima one but I did check them out at Scooterworks in Chicago when I was hanging around one day - I think the SX bags are a much higher quality than the Prima bags but that is only based on checking out the Prima for about 5 minutes last summer & never having them side by side.
Top

I always get a kick out of parking with Harleys

Here is my Stella along with MB Member Robbie's at Amerivespa Finally took the spare cover off Edit: I hope those work! Moving over to flickr from MobileMe and I'm flickrtarded. Someone please tell me if they're not displaying!
I'm outdoorsy in that I like getting drunk on patios.
Top 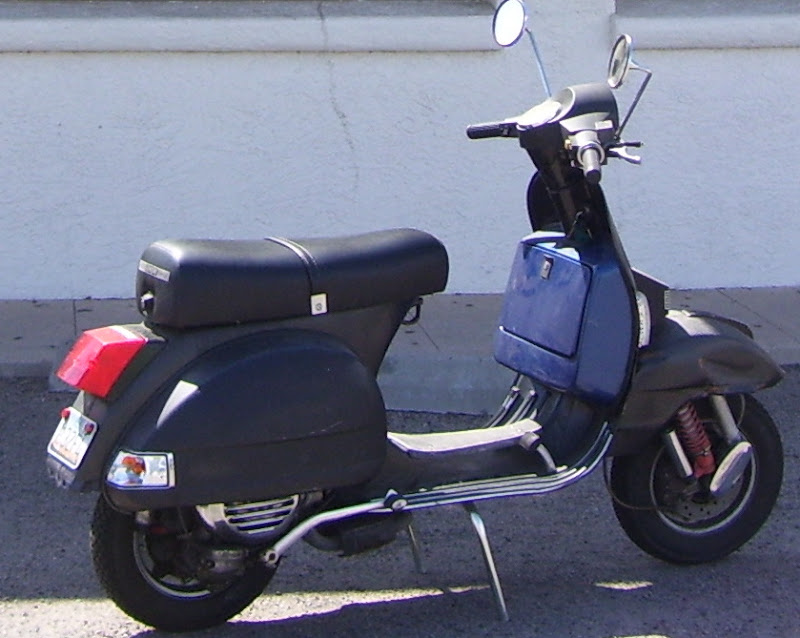 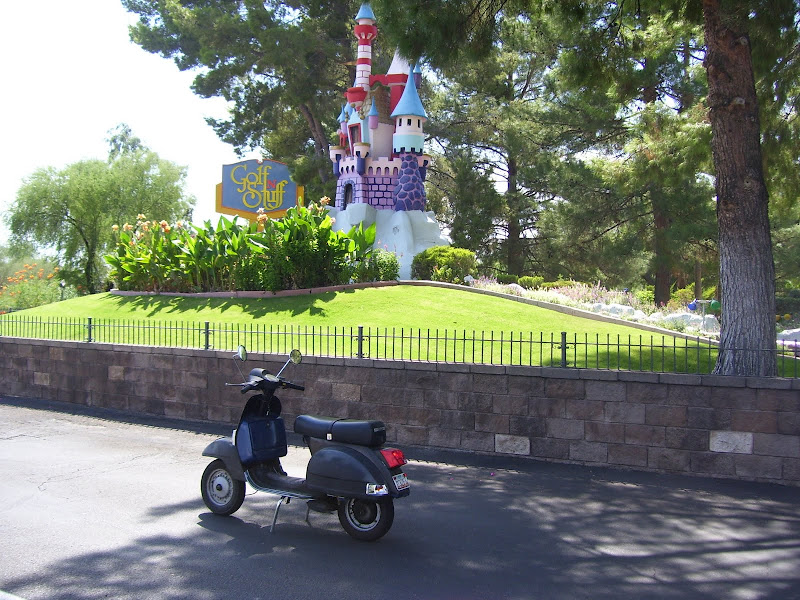 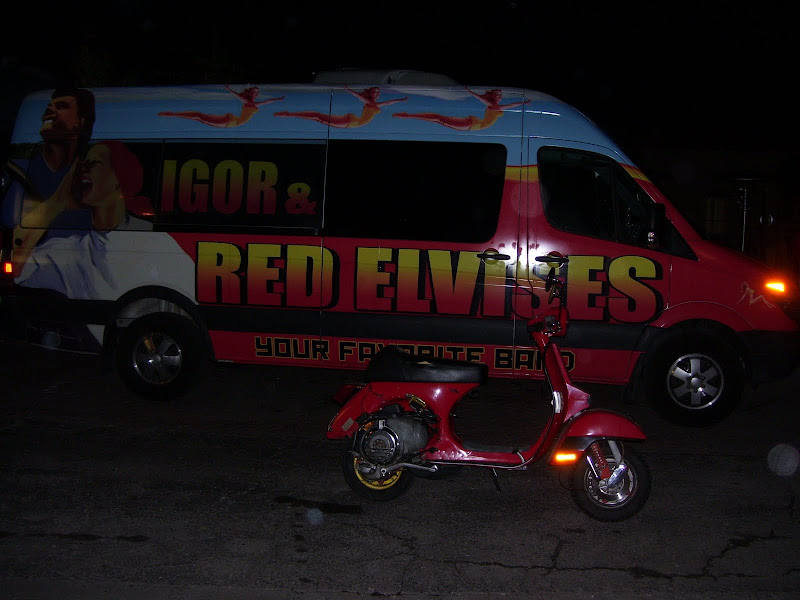 And in Vegas representinga whopping 2.667% of all Fireballs made. 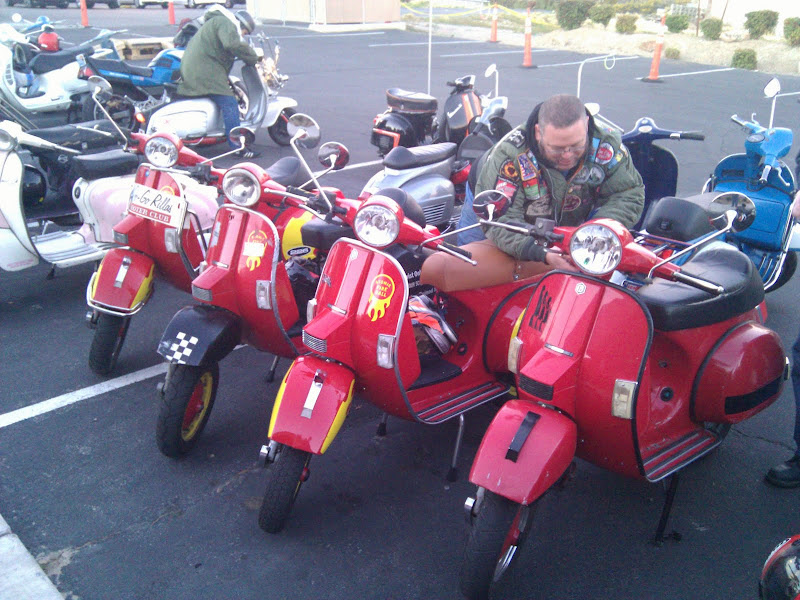 I'm outdoorsy in that I like getting drunk on patios.
Top

ScootLemont wrote:kitty - looking good
& I agree - I like the look without the spare tire cover

I'm not opposed to a tire cover, but that gray plastic was hideous! My uncle was over when I took it off and he was giving me a hard time asking why I was messing with it. Once it was off and he backed up and looked at it, he commented that I was right, it did look much better, lol. Eventually I'll get the checkerboard one from Scooterworks, but a few other priorities in the way.

One from tonight's ride. I'm outdoorsy in that I like getting drunk on patios.
Top

Here's Argyle checking out some art. So I think this is the easiest way for me to post s pic of my Stella, just added the racing stripe but she has a lot of other additions

It needs a good wash, I am just waiting for some special satin/matt black shampoo to turn up

Got a bit more painting to do and I have just ordered a new set of mirrors for it.
Top

What do you think of your Star overall? I've yet to see one in person.

here is Krampus before: and halfway back together.

and halfway back together:

I apparently need to learn how to read complete instructions before attempting to post. Sr. Judy my 1st grade teacher would be so disappointed in me.

let's try again shall we?

and halfway back together ish:

What do you think of your Star overall? I've yet to see one in person.

Next up I bought a 09 model star deluxe 125,I fitted a 150 top end to it and ran it for 3000 problem free miles until the big end bearing failed take out the top end with it. The engine was completely rebuilt and 3000 miles later its still going strong.

Then I bought my first 200 4t which is a fantastic scooter. It has so much torque and can easily sit at 60mph all day without even breaking a sweat with a top speed of just below 70. Unfortunately somebody in a car pulled out in front of me sending me flying down the road and writing off the scooter. I bought it back from the insurance company and I am in the process of cutting it down.

The stars/stella's are great scooters, they have a few niggling little problems, usually electrical. The Indian people don't seem to be very good with a soldering iron !

The earlier 2 stroke models had crank problems but the more recent models seem to have stronger cranks and as long as you dont mess with the engine too much they are pretty much bullet proof.

The latest vespa px's cost nearly £1000 more than the LML star's in the UK and if you put the two scooters next to each other you would really struggle to see where the extra money has gone.
Top

I apparently need to learn how to read complete instructions before attempting to post. Sr. Judy my 1st grade teacher would be so disappointed in me. let's try again shall we? and halfway back together ish: And in Vegas representinga whopping 2.667% of all Fireballs made.

I know the first stella.... in fact, did you buy it from someone in the East Valley in the Tempe/Scottsdale area?

Let me guess: hammered finish black paint, but a blue glovebox? Remanents of a sticker that used to be on the top of the rear tail light? '05 if I am correct? Possible plastic instead of glass headlamp cover due to the old one falling off? If so.... THAT'S MY OLD BIKE!!!

Granted it's looking ALOT rougher than when I sold it.

I painted the bike with a hammered semi-flat finish and left the glovebox off giving it a (at the time) nice semi-rat bike look. The front was not bashed up like that at all when I had it but I can almost say without at doubt that you have my old bike!
"Earth" without Art is just "Eh"...

HAHAHA! I'm just seeing this picture now. That's Toigo's P200, him and I were roommates for 8 days cross-country! Out of the shed, into the garage & ready for a new spark plug & battery (waiting on both from the local auto parts store)
In the mean time, a ride without the cowls

For money reasons... I had to part with my old Tangerine 2T a few years ago. While hunting for a used 2T (unsuccessfully) a month ago, I came across this 2012 Black Stella at a local shop. It was still in the crate when I went to go look at it, but they priced it right and I bought her as she sat. I knew going into this that I was buying a 50 year old "new" scooter, but Genuine has really let their quality control slip... this scooter has had so many little issues, it's unreal. The shop has been super apologetic and worked very hard to make everything right, but if I was brand new to Stellas and didn't know what I was getting myself into... I'd be furious. In hindsight, I wish that I had been more patient and waited to find a used 2T and put the extra money into performance parts. Oh well, it's still a fun scooter and i"m happy to be back on one... now to get her broke-in so that I can start tearin' her apart. You Debadged your bike?
Top

Kind of... the genuine badges are still on the horncast & of course the printing on the back of the seat.
The Stella logo came off one of the cowls during an "aggressive" washing last week so I popped the other two off as they are in the way for my soon to be added stripes.
I have them - they might go back on after the stripes.
Top

Couple weeks ago it was my Stella with a Nissan Leaf....
Today I found a Lamborghini in town

Heh. Stella looks over at Lambo and says "seriously?"